How Much Does Room and Board Cost for College?

It’s time to apply to college. Chances are, like most future undergraduate students, you plan to apply to multiple schools. As you select the schools you’re interested in attending, you are probably also peaking at the price tag.


Cost of attendance can vary drastically from school to school. Tuitions differ, but so do the costs of room and board and other factors.


In 2018, College Board published an online study about the trends in college pricing. It focuses heavily on the variation in tuitions across the United States.


Unsurprisingly, the data shows that the average annual cost of public institutions is lower than private schools—significantly so.  In 2018-19, the average combined tuition and fees for a public four-year school is $8,600 for a bachelor’s degree, while the average cost of the private nonprofit counterpart is $34,920.


College Board also breaks down the variation in costs for in- and out-of-state students attending public institutions by state. While the average price of tuition and fees across the United States for the 2018-19 school year is $26,290, tuition around the country can look very different. The study found that Wyoming has the lowest tuition and fees for in- and out-of-state students at $5,400 and $17,490, respectively. Vermont has the highest price tag at $16,610 and $39,400, respectively. Interested in attending a public four-year school? Check this chart to estimate how much your tuition will be.


You can also find information by state for two-year public institutions and flagship universities.


As a reminder, the costs shown above are costs of tuition and fees before aid. You can probably expect to pay less than ticket price. For example, though the average yearly cost of a private nonprofit four-year institution in 2018-19 is $34,920, students paid only $14,600 out of pocket.

Room and board covers the cost of the living and eating on campus. Need more info? Like tuition and fees, there is variation from institution to institution in cost.


In a publication by the Urban Institute, researchers reviewed the costs of on-campus living: room and board. They broke down room and board costs by campus location type and US region. Use this data to estimate your on-campus living costs based on the type of school you hope to attend. Note that this paper separates cost of housing and food, as the study compares these prices to market costs. 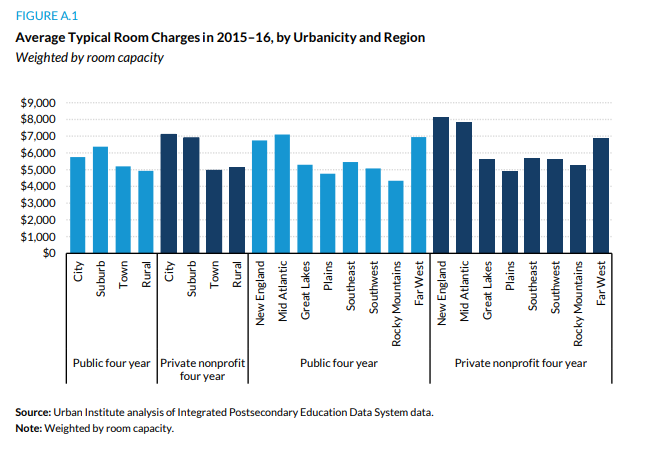 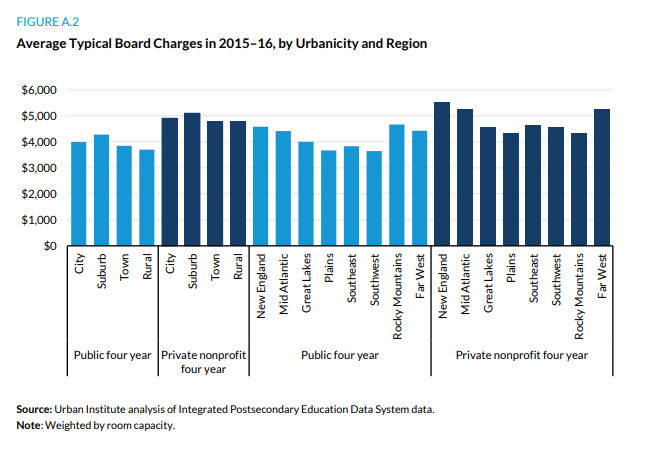 The variation in average room and board charges based on urbanization level (city, suburb, town, rural) show that attending school in a city or suburb is more expensive in both school types studied than in towns or rural areas.


Based on the charts above, you can see that the average room and board charges across region vary as well, with New England being among the most expensive regions for room and board across sectors. That said, this study suggests that though there is variation in board charges across regions and locales, charges appear to be more driven by institution sector (i.e., four-year private or public college) than urbanization level. Room costs seem to trend based on both urban level and US region.


The Urban Institute paper covered through the 2015-16 academic year and has the most comprehensive look at room and board costs. College Board touches on room and board costs in their Trends in College Pricing report and gives us a glimpse at the variations in cost of the 2018-19 school year.

As both Urban Institute and College Board show, cost of room and board and tuition and fees increases over time, first with and then above inflation.


It seems that historically, average college room prices across sector were offered below the local market rent until about 2012 when institution rates started outpacing market cost. We are now seeing that room costs at universities trend higher than local rents. Food prices, on the other hand, have remained generally stagnant across sector.


College Board finds that room and board charges historically rose more slowly than tuition and fees, but between 2008-09 and 2018-19, the two prices rose at about the same rate in the private nonprofit four-year sector. Public two- and four-year colleges still tend to increase their tuition and fees at a higher rate than room and board.


Why are Costs Different?

There could be a variety of reasons why the tuition of public schools is almost always less expensive than private schools. One major reason we know is that state schools are funded at the federal, state and local level. Private schools don’t have this income source, so tend to rely more heavily on tuition and fees to cover cost. In return, private schools are often able to offer smaller class sizes and more one-on-one professor support.


It is harder to say why room and board costs can vary. Urban Institute suggests there are a variety of reasons. According to the study, urbanization level and geographical region might both be contributing factors to room, but not food, charges. Food costs might relate to market rates, but they don’t have substantial proof. The study admits that there is really no established pattern between schools that would help determine cost differences. They suggest that there could be outlying factors, like a college might undergo two years of construction and therefore will increase room and board costs in those years to cover costs, skewing data related to market prices.


If your goal is to understand why you are expected to pay certain amounts for tuition, fees, room, or board at your schools of interest, your best chance is to contact the admissions or financial aid office for school-specific information.

Emma Kane
Emma is an experienced content writer and copy editor with a Bachelor's Degree in Rhetoric from Bates College and a background in advertising. She has a deep interest in international development, specifically within the context of displaced peoples, and now works full time for a refugee relief organization in their international education technical unit.
Share This:

What is a Tuition Guarantee?